According to insiders at SyFy Channel, a new TV show has been picked up which has been identified as a spin-off of a wildly successful Hungarian young adult series named Fear Itself.

While the original has a cast of college students living on the premises of the Pungo City campus, Night Fears, its spin-off, tells the story of a group of high schoolers meeting with the supernatural for the first time (well, for most of them).

Actual shooting will start early June at Penc Studios and Filmpark, in Hungary.

Below you will find the characters of the show, please choose one so we could send you the scripts in the coming days.

Andy Drabyk
Andy is his parents’ joy, their golden child. He’s got a real aptitude for sports, and his parents have mapped out his entire athletic career. It’ll be a great life, as long as he doesn’t let them down.

Dani Lussier
Dani is gorgeous and her parents are rich. The combination of her family’s money and her blossoming beauty mean she gets pretty much anything she asks for, and that’s the way she likes it.

Jaimie Collins
Jaimie long ago got over being teased for always having her nose in a book. She likes learning things, and finding things out, and uncovering secrets. Her ability to pick up the stories of objects certainly helps her do that, but she’s careful to make sure no one ever finds out she can do that. Being strange is one thing; being a freak is something else.

Mike Ng
Mike has been seeing ghosts since he was about six. Talking to them has always been easier than talking to living people; ghosts are simpler, and once you learn about a particular ghost, it never surprises you. Living friends are more complicated, and take a lot more work, and are much more likely to screw you over. No, ghosts are definitely easier to deal with.

Nicky Hamonic
Nicky doesn’t really want to be here, but her best friend said she was going, and she couldn’t let her go alone. That’s what friends do—they stand by each other no matter what. If her friend jumped off a bridge, yeah, she'd follow her. That's what friends do.

Terry Jefferson
Everyone calls his church a “cult,” but what does that really mean? It’s just a word they throw around. The hepherd says it’s just because they don’t understand. And Terry can believe that. He believes everything the Shepherd says. And he’s felt the power of the Universe flowing through his hands. Let them laugh. 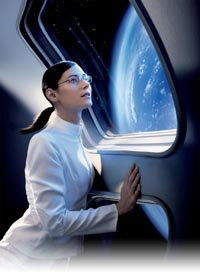